You may or may not have heard but Twitter has doubled their “real estate” from the famous 140 character count Tweets to now 280 characters. 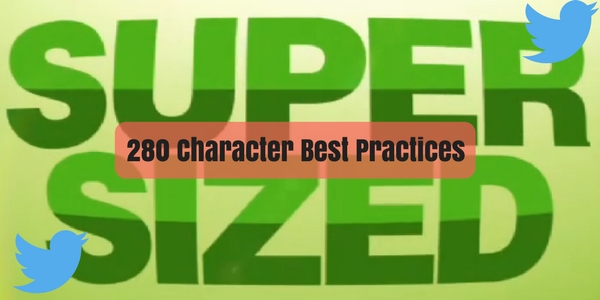 That’s for sure a game changer in the Twitter Universe as anyone and everyone on its social network can say a lot more of what’s on his or her mind!

But with every change on social media there are also best practices. Here are just a few when composing your new “supersized” Tweets.

280 characters is a huge change, probably the biggest in Twitter’s history. Like with anything else, there will be some growing pains but for businesses this should be a great opportunity to tell more of their story to Twitter’s 330 million monthly active users.

For additional tips and a strategy on how to utilize the new Twitter, contact The Interactive Imprint at 954-254-1650 or visit TheInteractiveImprint.com

I have been a social media consultant for the past half decade. Before then I worked in traditional advertising for various South Florida ad agencies. Currently I work with small and medium sized businesses on content creation and strategy for their social media channels. I am also on the board as the social chair for the Florida Direct Marketing Association and South Florida Interactive Marketing Association.
View all posts by Michael Sherman →